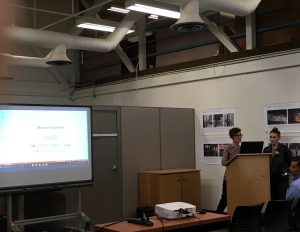 On May 29, 2017, Dr. Heather Milne and Research Assistant Hailey Primrose spoke to a group of approximately 25 people about the upcoming Museum Queeries workshop. The two discussed the overall project, the theme of curatorial dreaming that will frame the workshop, and the overarching questions that the project and the workshop intend to respond to.

This presentation was a part of the University of Winnipeg’s Pride Film and Lecture Series. 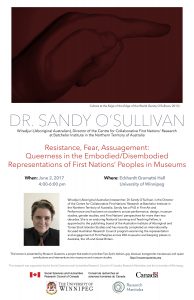 The Museum Queeries research team and The University of Winnipeg welcomes Wiradjuri researcher Dr. Sandy O’Sullivan*, (Batchelor Institute, Northern Territory of Australia), as the keynote lecturer for the Museum Queeries: Intersectional Interventions into Museum Cultures and Practices workshop, which runs from June 2-4, 2017.

Dr. O’Sullivan’s keynote lecture, titled Resistance, Fear, Assuagement: Queerness in the Embodied/Disembodied Representations of First Nations’ Peoples in Museums, is on Friday, June 2, 2017, at 4:00 pm in Eckhardt-Gramatté (EG) Hall at UWinnipeg. This lecture is free and open to the public. It will be followed by a public reception from 6:00 – 7:00 pm in the EG Hall Foyer.

O’Sullivan’s lecture, will discuss research she has undertaken for the last six years supported by the Australian Government. This study, which explores the representation and engagement of First Nations’ Peoples in the national museum space, led O’Sullivan to visit over 470 museums across Australia, the United States, and Great Britain.

O’Sullivan explains that, informed by a history of mistrust between Aboriginal Peoples and museums practices, the research began through discussion with Aboriginal Elders. One Elder urged a reversal of the intense scrutiny that museums have placed on Community, by suggesting that these institutions be required to articulate what works? in representing First Nations’ Peoples across the museum space. At another meeting, an Elder talked about the importance of an expansive and diverse representation where their lives are not reduced to difference or the exotic.

“While the focus was initially on some of the negative concerns around representation, the idea of finding what works brought a range of positive responses from museums,” said O’Sullivan. “What works? drew out complex and demonstrations of how contemporary museum spaces were challenging their own ideas of First Nations’ identity. Sort of. It was 382 museums into the research that I first realized that sex, gender, or sexuality were rarely displayed or discussed in relation to the presentation of First Nations’ Peoples.  This realization — connected to an intriguing object many thousands of years old — led to a re–interrogation of the data, and a rethinking of how I could have possibly overlooked the very queer elephant in the room of Indigenous representation.”

*Wiradjuri (Aboriginal Australian) researcher, O’Sullivan, is the Director of the Centre for Collaborative First Nations’ Research at Batchelor Institute in the Northern Territory of Australia. O’Sullivan has a PhD in Fine Art and Performance and has been an academic across performance, design, museum studies, gender studies, and First Nations’ perspectives for more than two decades. She is an enduring National Learning and Teaching Fellow, is appointed to the publishing board of the Australian Institute of Aboriginal and Torres Strait Islander Studies and has recently completed an internationally-focused Australian Research Council program examining the representation and engagement of First Peoples across 450 museums and keeping places in Australia, the US and Great Britain.

The invite only workshop will be hosted at UWinnipeg this June to coincide with Winnipeg’s Pride Week and includes a site visit to the Canadian Museum for Human Rights (CMHR). The workshop will be facilitated by Dr. Shelley Ruth Butler (McGill) and include a Curatorial Dreaming exercise.

“The overall goal of the workshop is to connect members of our newly formed Museum Queeries research network, and translate specific objectives into tangible strategies for engaging museums on 2S+LGBTTQ issues,” Milne said. “We use an intersectional approach to think through ways in which gender, sexuality, race, class, ability, religion, ethnicity, and national identities are inter-implicated in museums and in museumgoers’ points of contact with museums. This workshop will be the first time our research team, which hails from across Canada, the U.S., and Australia, will come together to begin these important discussions.”

The CMHR is a catalyst for Museum Queeries and an ideal research site given the University’s proximity to the museum here in Winnipeg. UWinnipeg has already established a relationship with the museum through the work of its Cultural Studies Research Group and Failler’s SSHRC Partnership Development Grant project. The intent is to engage and potentially collaborate with the CMHR and other museums, galleries, and exhibition sites by proposing ways in which they might more effectively address 2S+LGBTTQ issues.

About the Project
Museum Queeries is a new interdisciplinary, collaborative research project based at UWinnipeg that involves academics, activists, curators, artists, community stakeholders, and students locally and internationally. As institutional spaces, museums are often closely linked to national identities and histories and also, tacitly, to heteronormative and cisnormative representations of the polity and public culture. Museum Queeries prioritizes Indigenous Two-spirit, lesbian, gay, bisexual, transgender, transsexual, and queer (2S+LGBTTQ) contributions and interventions into museums and museum studies as a means of addressing structural exclusions and opening new modes of productive inquiry and activism. The idea of “queerying” the museum in this case is not only about addressing the museum’s representation of gender and sexuality; it is also about challenging normative formations including white privilege, racism and settler colonialism, among other systems of oppression, as they operate alongside homophobia and transphobia.